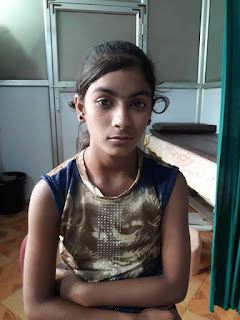 
My memories
Birth defects ... Speech problems
Posted on 9th June 2018
Dr.Gitesh sent this photo stating that. .......Good evening sir
Birth defect .
Renuka Behera 13 years old : Unable to talk & hear , naturally .
She can't talk loudelly , speak slow with clear voice , and slow sound can't absorbed .
She can write and read with beautiful handwriting as she is .
When you were younger and first began talking, you may have lisped, stuttered, or had a hard time pronouncing words. Maybe you were told that it was "cute," or not to worry because you would soon grow out of it. But if you're in your teens and still stuttering, you may not feel like it's so endearing.
You're not alone. More than 3 million Americans have the speech disorder known as stuttering (or stammering, as it's known in Britain). It's one of several conditions that can affect a person's ability to speak clearly.
Some Common Speech and Language Disorders
Stuttering is a problem that interferes with fluent (flowing and easy) speech. A person who stutters may repeat the first part of a word (as in wa-wa-wa-water) or hold a single sound for a long time (as in caaaaaaake). Some people who stutter have trouble getting sounds out altogether. Stuttering is complex, and it can affect speech in many different ways.
Articulation disorders involve a wide range of errors people can make when talking. Substituting a "w" for an "r" ("wabbit" for "rabbit"), omitting sounds ("cool" for "school"), or adding sounds to words ("pinanio" for "piano") are examples of articulation errors. Lispingrefers to specific substitution involving the letters "s" and "z." A person who lisps replaces those sounds with "th" ("simple" sounds like "thimple").
Cluttering is another problem that makes a person's speech difficult to understand. Like stuttering, cluttering affects the fluency, or flow, of a person's speech. The difference is that stuttering is a speech disorder, while cluttering is a language disorder. People who stutter have trouble getting out what they want to say; those who clutter say what they're thinking, but it becomes disorganized as they're speaking. So, someone who clutters may speak in bursts or pause in unexpected places. The rhythm of cluttered speech may sound jerky, rather than smooth, and the speaker is often unaware of the problem.
Apraxia (also known as verbal apraxia or dyspraxia) is an oral-motor speech disorder. People with this problem have difficulty moving the muscles and structures needed to form speech sounds into words.
My advise
1... The above are scientific causes for speech problems.
2... Take care and prevent such birth defects
3. To open up vocal card before birth needs sufficient oxygen to the child which mother has to supply..
4... Due to mother's mother's food the child could not receive oxygen as needed
Brought to U ..... http://successgain.info