Unhealthy food may cause Heart problems 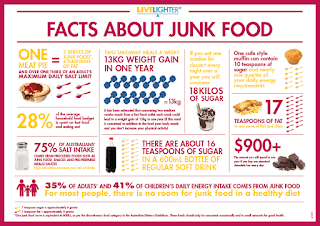 
My memories
Unhealthy food may cause Heart problems
Posted in 2014

Fast food may also put your heart health at risk and negatively impact your mood, according to statistical studies. Scientists from the University of Las Palmas de Gran Canaria and the University of Granada examined data on 9,000 participants, tracking their diet and lifestyle habits. They found a relationship between fast food and baked good consumption and low mood. Researchers concluded that eating fast food increased the participants' risk for depression. Compared to those who ate little to no fast food and baked goods, regular consumption increased the risk of depression by 51 percent, report the authors. The study was reported in the March 2012 edition of the Public Health Nutrition journal.
Americans and other Western countries tend to eat more processed and fast food than Eastern areas, and scientists have found that when Eastern populations eat fast food in a similar pattern to the West, heart disease risk increases. University of Minnesota School of Public Health researchers evaluated the eating habits of Singapore residents. They report that frequently eating Western-style fast food increased the risk of dying of heart disease based on frequency. Eating fast food two to three times per week increased the risk of dying from coronary artery disease 50 percent. The greatest risk was found when subjects ate fast food four or more times weekly; the risk of dying from CAD rises to 80 percent. Even eating fast food just once each week increases heart disease risk; authors report a 20 percent increase comes along with once weekly consumption of fast food. The journal Circulation published the study in July 2012.