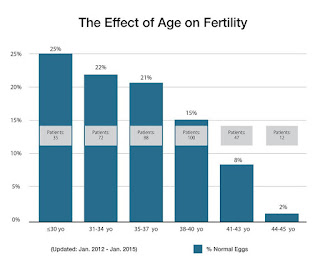 Pregnancy in the 20’s
Women in their twenties have a good chance of becoming pregnant as a result of a relatively greater number of eggs in their ovaries. Additionally, a larger percentage of those eggs are normal genetically. Since a woman is born with all of the eggs that they will have in their lifetime, the older she gets the fewer eggs are left. In addition, as women age the percentage of genetically normal eggs remaining decreases. This is why women have a decreasing fertility rate, increased miscarriage rate and increased chance of birth defects like Down syndrome as they age.
The pregnancy rate per month of a woman in her 20’s is about 20-25%. Because of this, a woman should seek help with fertility if she has been unsuccessful trying to conceive after 12 months of actively trying. The spontaneous miscarriage rate is only about 5-10% and the incidence of a genetic abnormality like Down syndrome is about 1/1200. Women in their 20’s are probably much more likely to be physically active and should moderate exercise in the first and third trimesters of pregnancy. Certain types of exercise to avoid are those that excessively increase the heart rate or body temperature such as spinning, cause bouncing like running or certain types of aerobic classes, or risk loss of balance such as martial arts or aggressive tennis. Exercise that maximizes the use of multiple muscle groups and is aerobic are preferred such as swimming, walking and Pilates. At all ages women should avoid smoking, alcohol, caffeine and certain foods such as raw fish (sushi and sashimi) as well as fish which may contain significant amounts of heavy metals.
It clearly shows that any woman should not postpone for Pregnancy due to any reason....From the beginning I am telling U the same.

My advise
1.. Every woman is fertile 100% .  The most fertile age is  below 25 years
2.. As your age is more than 30 years fertility rate will be  diminished t very fast n becomes  0%
3..Your age plays an important role to conceive.
4.. At early age all your body parts are active and your egg will be healthy.
5.. I advise every woman to not postpone for pregnancy due to any reason.