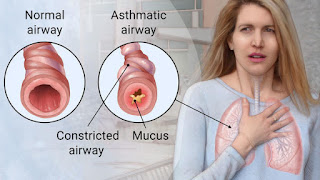 
My memories
Asthma sufferers in USA
Posted in 2013


Asthma is a lifelong disease that causes wheezing, breathlessness, chest tightness, and coughing. It can limit a person's quality of life. While we don't know why asthma rates are rising, we do know that most people with asthma can control their symptoms and prevent asthma attacks by avoiding asthma triggers and correctly using prescribed medicines, such as inhaled corticosteroids.
The number of people diagnosed with asthma grew by 4.3 million from 2001 to 2009. From 2001 through 2009 asthma rates rose the most among black children, almost a 50% increase. Asthma was linked to 3,447 deaths (about 9 per day) in 2007. Asthma costs in the US grew from about $53 billion in 2002 to about $56 billion in 2007, about a 6% increase. Greater access to medical care is needed for the growing number of people with asthma.

Asthma is increasing every year in the US.

Too many people have asthma.

Asthma has a high cost for individuals and the nation.

I advise every couple to prevent this health problem to your would be child.  Take care and follow my advise.   There is no permanent treatment for Asthma

1...   Prevent your child from Asthma if any member of your family or your wife's family is suffering from Asthma.. Follow as under
a...   Practice long breathing
b...   Avoid sweets and oil foods
c...   Eat healthy food to receive Vitamin C in your diet
d...   Eat food which will generate heat in your body

2..   Follow above to prevent your child from Asthma before conceiving and after conceiving