Birth defects due to gestational diabetes in Mother

July 28, 2018
Birth defects due to gestational diabetes in Mother 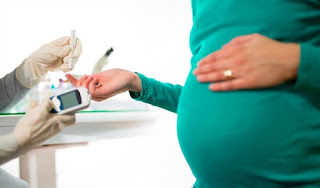 
Diabetics and women who get gestational diabetes (diabetes that occurs during pregnancy) are advised to maintain strict control over the condition during their pregnancy. Raised blood sugar, especially during the first trimester, can cause birth defects and miscarriage. Gestational diabetes tends to have an onset towards the end of pregnancy and is typically less dangerous than traditional diabetes, but can lead to macrosomia, or a “fat” baby. Babies with macrosomia face health problems of their own, including damage to their shoulders during birth. Because of the extra insulin made by the baby’s pancreas, these newborns may have very low blood glucose levels at birth and are also at higher risk for breathing problems. Babies with excess insulin become children who are at risk for obesity and adults who are at risk for type 2 diabetes” (from the ADA).

My advise
1..  The couple should control diabetes if any before conceive
2..  Infants of mothers with diabetes are at greater risk for several problems, especially if blood glucose levels are not carefully controlled, including the following: