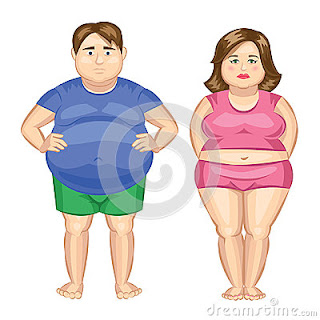 
My memories
Obese couple may face Infertility Problems
Posted in 2014

Obese Couple will face More Infertility ProblemsA couple trying to conceive may face an extra challenge when both the man and the woman are overweight or obese, new research suggestsThe researchers analyzed data from 47,835 couples who participated in a nationwide study of pregnancy outcomes in Denmark. Women in the study completed four interviews over a period of two years, giving information for both themselves and their partners on weight, height, previous pregnancies, smoking, and socioeconomic status
A total of 8.2% of the women, 6.8% of the men, and 1.4% of the couples in the study were obese, defined as having a body mass index (BMI) of 30 or more. BMI looks at weight in relation to height and is used as an indicator of body fat.
As measured by BMI, a 5-foot-2-inch person who weighs 165 pounds or more is considered obese, as is a 6-foot-tall person who weighs 220 or more.

However, Catsicas (2013), stressed that lifestyle intervention studies conducted with female patients suffering from PCOS (95% of women attending fertility clinics have PCOS), were associated with high dropout rates of up to 38%.These disappointing statistics are influenced by the hormone disruptions that characterise PCOS. Women with PCOS tend to gain weight rapidly because of insulin resistance which has an anabolic effect, combined with an increased appetite and a tendency to crave high glycaemic index (GI) starches (sweets, white bread, cakes, etc) caused by the androgens their bodies are producing. In addition, psychological factors play an important role. Obese women with PCOS tend to feed their depressed and negative moods with high-fat, high-GI foods, thus making the situation even worse. Finally such patients tend not to feel satiated because their ghrelin levels are also disturbed. All these factors affect the chances that an obese woman suffering from PCOS will manage to lose 5% of her weight so that she can improve her chances of falling pregnant.

The only solution for this problems is to change your Life style and follow Healthy habits.


My advise
1..   I am always telling that obesity is the cause of  many health problems including Infertility.
2...  Obese couple should follow healthy food so as to reduce obesity