Smoking is harmful to your child

September 08, 2019
Smoking is harmful to your child 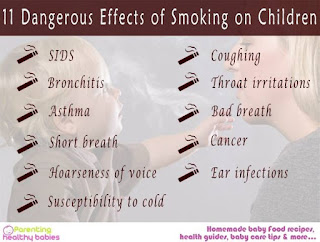 
My memories
Smoking is harmful to your child
Posted in 2014


How Cigarettes May Harm Developing Babies
Cigarette smoke contains about 4,000 chemicals. Researchers don't fully understand how that toxic mixture may cause birth defects.
But they have some suspicions.
Part of the problem may be that the baby isn't getting enough oxygen when mom smokes.
Nicotine, the addictive substance in cigarettes, causes blood vessels to constrict, which may choke off the supply of oxygen to the fetus.
And carbon monoxide, a colorless, odorless gas that's present in high levels in cigarette smoke, binds more strongly to hemoglobin -- the molecule that ferries oxygen through the blood -- than oxygen itself, lowering the amount available to the baby.
"It personally absolute stuns me that some people still smoke during pregnancy," Hackshaw says.
Studies show 14% of women in the U.S. smoke while pregnant. That number jumps to 20% expectant mothers under age 25.
"The advice has to be 'don't smoke'," says Katz.
My advise
1. Please note how smoking is harmful to your child
2..Because their bodies are developing, infants and young children are especially vulnerable to the poisons in secondhand smoke
3.Both babies whose mothers smoke while pregnant and babies who are exposed to secondhand smoke after birth are more likely to die from sudden infant death syndrome (SIDS) than babies who are not exposed to cigarette smoke.
4. Mothers who are exposed to secondhand smoke while pregnant are more likely to have lower birth weight babies, which makes babies weaker and increases the risk for many health problems
5. Babies whose mothers smoke while pregnant or who are exposed to secondhand smoke after birth have weaker lungs than other babies, which increases the risk for many health problems.
6. Secondhand smoke exposure causes acute lower respiratory infections such as bronchitis and pneumonia in infants and young children.
7. Secondhand smoke exposure causes children who already have asthma to experience more frequent and severe attacks.
8. Secondhand smoke exposure causes respiratory symptoms, including cough, phlegm, wheezing, and breathlessness, among school-aged children.
9. Children exposed to secondhand smoke are at increased risk for ear infections and are more likely to need an operation to insert ear tubes for drainage.
10.. To have Healthy child quit this habit before conceiving
Brought to U .... http://successgain.info
C