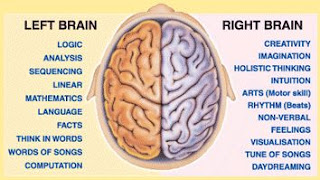 Modern society and the educational system tend to discriminate against the right hemisphere and nonverbal forms of intellect.
Experiments show that most children rank highly creative (right brain) before entering school. Because our educational systems place a higher value on left brain skills such as mathematics, logic and language than it does on drawing or using our imagination, only ten percent of these same children will rank highly creative by age 7. By the time we are adults, high creativity remains in only 2 percent of the population.
Recent studies have shown that the abacus method of mental calculation is effective in the development of the right brain. At first, this idea was only a hypothesis, but the recent development of high-tech brain imaging equipment has helped provide tangible research data. Thanks to the development of cerebral physiology and imaging equipment that can accurately measure the amount of blood flow in the brain, recent studies have proven that the abacus method of mental calculation is extremely effective in activating the right brain. According to the research, the learning and thinking process is enhanced when both sides of the brain participate in a balanced manner.
We are seeing in many families that their children possess different talent in different fields...some are creative..some are artistic ...some posses talent in literature etc...Their parents think if any body is there in their fore fathers or think of their relatives and imagine some thing...I being Medical Astrologist I wish to tell you according to my research that all qualities of the child is according to the planetary position at the time of parents association(Sex)..due to their child birth occur....
My advise
1...    The human brain is an intricate organ. At approximately 3 pounds, it contains about 100 billion neurons and 100 trillion connections. Your brain is command central of all you think, feel, and do.
2...   Your brain is divided into two halves, or hemispheres. Within each half, particular regions control certain functions.
3...   The two sides of your brain look very much alike, but there’s a huge difference in how they process information. Despite their contrasting styles, the two halves of your brain don’t work independently of each other
4...   The human brain is constantly reorganizing itself. It’s adaptable to change, whether it’s physical or through life experience. It’s tailor-made for learning.
5...   The theory is that people are either left-brained or right-brained, meaning that one side of their brain is dominant. If you’re mostly analytical and methodical in your thinking, you’re said to be left-brained. If you tend to be more creative or artistic, you’re thought to be right-brained.
6...   This theory is based on the fact that the brain’s two hemispheres function differently. This first came to light in the 1960s, thanks to the research of psychobiologist and Nobel Prize winner Roger W. Sperry.
7...  The left brain is more verbal, analytical, and orderly than the right brain. It’s sometimes called the digital brain. It’s better at things like reading, writing, and computations.
8...  Either Left or Right brain of your child you can develop various skills, subjects, ..................................before birth of your child with your positive brain and teaching your child.   Your brain plays important role to develop your child's brain.  So develop positive attitude.