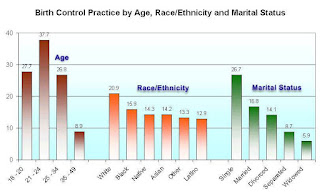 
My memories
Birth control may also causes Infertility
Posted in 2014

Once you stop taking most forms of hormonal birth control, you can get pregnant within a month, says Dr. Schlaff. The one exception: Depo-Provera, the injectable birth control. Each Depo-Provera injection prevents pregnancy for 12 to 14 weeks—and while some women do get pregnant in as little as one month after that protection wears off, it can take other women up to a year to conceive. Doctors recommend women stop using injectable birth control several months before they hope to get pregnant.
Women under 30 years old are incredibly fertile—their ability to get pregnant is at its peak. In the U.S., about three in four sexually active women under 30 are using some type of birth control. But many of them ask me, does using birth control now hurt my chances of getting pregnant in the future? Sigh of relief: it does not.
All reversible birth control methods will help prevent pregnancy while you’re using them, but none have long-lasting effects on your ability to get pregnant when you stop. That’s why women who use the Pill but accidentally forget to take it for a few days can get pregnant that month.
Let’s look, for example, at how long it takes for women to get pregnant when they quit the Pill compared to when they quit non-hormonal fertility awareness methods (FAM, sometimes called natural family planning). A big study of over 2,000 women who quit the Pill after using it for an average of seven years found that 21% were pregnant in one month and 79% were pregnant in a year. Women who stopped using FAM had very similar rates of pregnancy, with 20-25% pregnant in one month and 80% pregnant in a year. In other words, women who quit the Pill get pregnant just as fast as other women, even if they’ve used the Pill for years.
Most of young couple think to enjoy the life without without a child and use birth control methods. They don't think how these medicines will cause for their Infertility when they want to give birth to a child...I have seen many couple who didn't have a child even after trying years together with different method such as IVF or Surrogacy or other..by spending their hard earned money and time....I advise every couple not to use birth control method...
My advise
1...   “When you’re on the pill for many years, the additional hormones can mask ovulatory problems while artificially giving a woman her menstrual cycle,” explains Frank Chang, M.D. (Rockville, MD).  “Changes in your body, like increased body fat content, or stress that could affect a woman’s cycle, are often masked by birth control pills,” Chang adds.
2...  Contrary to a popular myth, the pill has no negative impact on fertility. However, it is easy to understand why there are myths about birth control pills causing infertility as some women experience a delay in resuming ovulation and menses following prolonged birth control use. For some women it may take months after stopping birth control for their menses to return.
3..   With hormonal birth control, regular monthly bleeding doesn't provide any health benefits.
4.... Traditional methods of birth control — including estrogen-progestin birth control pills, the contraceptive skin patch and the vaginal ring — were designed to be used in a way that mimics a natural menstrual cycle. For example, a traditional pill pack contains four weeks — or 28 days — of pills, but only the first three weeks contain hormones that actively suppress your fertility. The pills for the fourth week are inactive. The bleeding that occurs during the week you take the inactive pills is called withdrawal bleeding. This is your body's response to stopping the hormones
5.... Continuous-use birth control is when you take active hormones for a year or longer, with no breaks. Because you do not stop taking active hormones, you do not have withdrawal bleeding.
6.... Extended-use birth control is when you extend the amount of time you take active hormones to longer than the typical 21 days. But over the course of the year, you periodically take breaks from the hormones, during which you experience withdrawal bleeding.
7...  Breakthrough bleeding — bleeding or spotting between periods — is common when you use hormonal birth control to delay or prevent periods, especially during the first few months. Breakthrough bleeding typically decreases over time, however, as your body adjusts to the new regimen.
8...  Another drawback of routinely delaying your period is that it may be more difficult to tell if you're pregnant. If you have morning sickness, breast tenderness or unusual fatigue, take a home pregnancy test or consult your doctor.
9.... I advise every woman not to take birth control pills for longer time which may cause of Infertility
Brought to U http://successgain.us