Working of our Brain 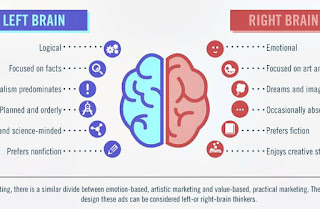 
My memories...
Workings of Our Brain..
Posted in September 2015

Working of our Brain
The human brain is made up of two halves. These halves are commonly called the right brain and left brain, but should more correctly be termed ‘hemispheres’. For some reason, our right and left hemispheres control the ‘opposite’ side of our bodies, so the right hemisphere controls our left side and processes what we see in our left eye while the left hemisphere controls the right side and processes what our right eye sees.
The concept of right brain and left brain thinking developed from the research in the late 1960s of an American psychobiologist Roger W Sperry. He discovered that the human brain has two very different ways of thinking. One (the right brain) is visual and processes information in an intuitive and simultaneous way, looking first at the whole picture then the details. The other (the left brain) is verbal and processes information in an analytical and sequential way, looking first at the pieces then putting them together to get the whole. Sperry was awarded a Nobel Prize in 1981.
So as you know, the human brain consists of the right brain and the left brain. The shapes of these two parts are similar, but differences have been gradually found in their functions. The left brain is also referred to as the digital brain. It controls reading and writing, calculation, and logical thinking. The right brain is referred to as the analog brain. It controls three-dimensional sense, creativity, and artistic senses. These two work together, to allow us to function as humans.
All brain functions are developed before birth...I have seen many parents that they desire to see their child in respectable profession like Doctors, Engineers, Scientists or other and force them to join in training institutes in which the child is not interested. Due to this they will face lot of tensions and some attempts suicide or drop in the middle of the degree or other...I advise every parent not to force their child in which is he is not interested...

My advise
1...   When you wants to give birth to a Intelligent child you should consume minimum oxygen for your body needs so that sufficient oxygen will be available to your child's brain development.
2...   Oxygen is helpful to open all cells of your child's brain before birth
3...   During development stage of your child's brain he needs 60% water which you have to supply.
4...   Every one on this universe takes 6 liters of Oxygen per minute.  Our body needs 120 ml per breath to keep our brain, heart and kidney cells and remaining will be used by for digesting our food,  maintain blood cells and cleaning of all cells of our body.  You can minimize oxygen consumption it is only possible if your take healthy food which will take minimum oxygen for your body and sufficient oxygen will be available to develop all cells of your child's brain and body,
5...   Drink sufficient water