Brain part - Cerebrum and its functions 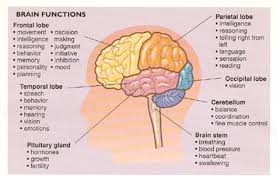 
My memories
Brain Part...Cerebrum and its Functions
Posted in 2015

Cerebrum
The cerebrum constitutes the largest part of the human brain. It is also known as the cortex and is responsible for performing a great number of important brain functions, including action and thought processing. The cerebrum is further subdivided into four different sections that have their own respective functions and are termed as lobes. The names of these lobes are; frontal lobe, occipital lobe, parietal lobe and temporal lobe.
Frontal Lobe: The frontal lobe is tasked with the duty of performing functions like expressive language, reasoning, higher level cognition and motor skills. It is positioned at the front portion of the brain. Any damage to it can lead to changes of socialization, attention, sexual habits, etc.
Parietal Lobe: The parietal lobe is responsible for processing the information sent to the brain by the tactile senses like pain, pressure and touch. It is placed in the center of the brain. Any damage to it can cause problems with language, ability of controlling eye gaze and verbal memory.
Occipital Lobe: The occipital lobe is tasked with the duty of interpreting the information being sent to the brain by the eyes. It is positioned at the back of the brain. If it is damaged, your visual ability will be affected, like unable to recognize colors, words and objects.
Temporal Lobe: The temporal lobe is responsible for forming memories and processing the sounds being recorded by the ears. It is placed at the bottom of the brain. Any damage to it can cause problem with language skills, speech perception and memory.
It causes the functions our eyes, ears, ability to learn....Your child's Brain is developed before birth....Please note the following
My advise
1. I have seen many children who were very poor to grasp subject, to learn etc... These children will not develop in their profession. Before birth you can develop their brain with Drinking Water
2...All brain cells will be expanded before birth. It needs sufficient Oxygen.
So the mother's food is important to consume minimum oxygen for digestion of her food so that the child receive oxygen needed.
3.. Lack of nutrients may also cause this problem..  Eat healthy food which contain Zinc, Iron and other required nutrients to develop brain functions of your child