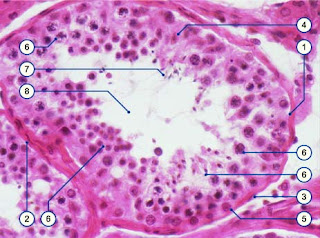 
My memories
Development of Sperm
Posted in 2013

Spermatogenesis is initiated in the male testis with the beginning of puberty. This comprises the entire development of the spermatogonia (former primordial germ cells) up to sperm cells. The gonadal cords that are solid up till then in the juvenile testis develop a lumen with the start of puberty. They then gradually transform themselves into spermatic canals that eventually reach a length of roughly 50-60 cm. They are termed convoluted seminiferous tubules (Tubuli seminiferi contorti) and are so numerous and thin that in an adult male testicle their collective length can be 300 to 350 meters. They are coated by a germinal epithelium that exhibits two differing cell populations: some are sustentacular cells (= Sertoli's cells) and the great majority are the germ cells in various stages of division and differentiation.
The development of the germ cells begins with the spermatogonia at the periphery of the seminal canal and advances towards the lumen over spermatocytes I (primary spermatocytes), spermatocytes II (secondary spermatocytes), spermatids and finally to mature sperm cells.

The numbers mentioned in the picture are as follows


My advise
1...  Sperm development in male is as shown in the picture in following stages

2... Generally when a male is entering in youth stage i.e. 15 to 18 years but full sperm structure develops after 21 years only
3... The male should be complete mature mentally i.e. when he can take right decision at what ever age may be he should give birth to the child.
4... They should follow healthy habits to form healthy sperm
5... Their mind should be mature before taking the decision to healthy child with super qualities.