Pancreas and its functions 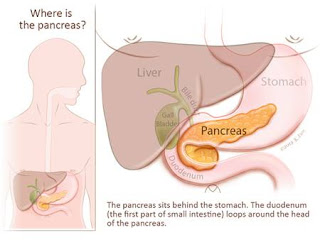 My memories
Pancreas and its functions
Posted on 24th November 2015

What is the pancreas?
The pancreas is a long flattened gland located deep in the belly (abdomen). Because the pancreas isn’t seen or felt in our day to day lives, most people don't know as much about the pancreas as they do about other parts of their bodies. The pancreas is, however, a vital part of the digestive system and a critical controller of blood sugar levels.
Where is the pancreas?
The pancreas is located deep in the abdomen. Part of the pancreas is sandwiched between the stomach and the spine. The other part is nestled in the curve of the duodenum (first part of the small intestine). To visualize the position of the pancreas, try this: touch your right thumb and right "pinkie" fingers together, keeping the other three fingers together and straight. Then, place your hand in the center of your belly just below your lower ribs with your fingers pointing to your left. Your hand will be the approximate shape and at the approximate level of your pancreas.
Because of the deep location of the pancreas, tumors of the pancreas are rarely palpable (able to be felt by pressing on the abdomen). This explains why most symptoms of pancreatic cancer do not appear until the tumor has grown large enough to interfere with the function of the pancreas or other nearby organs such as the stomach, duodenum, liver, or gallbladder.
What does the pancreas do?
A healthy pancreas is able to produce the right chemicals at the right times in the right quantities in order to properly digest the food we eat. After food enters the duodenum, the exocrine tissues secrete a clear, watery, alkaline juice that contains several enzymes that break down food into small molecules that can be absorbed by the intestines. These enzymes include:
Trypsin and chymotrypsin to digest proteins
Amylase to break down carbohydrates
Lipase, to break down fats into fatty acids and cholesterol.
The endocrine portion of the pancreas, or islets of Langerhans, is composed of several cells that secrete hormones directly into the bloodstream. Insulin is a hormone secreted by pancreatic beta cells in response to a rise in blood sugar. The hormone also moves glucose from the blood into muscles and other tissues so they can use it for energy. In addition, insulin helps the liver absorb glucose, storing it as glycogen in case the body needs energy during stress or exercise.
Glucagon is a hormone secreted by pancreatic alpha cells when there is a decrease in blood sugar. Its primary job is to cause glycogen to be broken down into glucose in the liver. This glucose then enters the bloodstream in order to restore the level to normal.
If pancreas does not function i.e. it lost the efficiency then sugar contents which entered in our body with our food will filled in blood. It is called as Diabetes...You can increase the function of Pancreas with your Healthy food....Protect it and live happy..brought to you http://successgain.info