Obesity causes many problems in pregnancy ...1 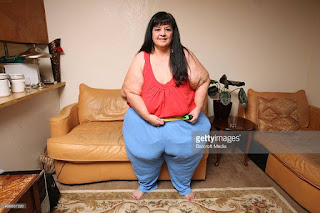 My memories
Obesity causes many problems in pregnancy ...1
Posted in 2014

Woman at the age of 18 is obese then Infertility problem may face
Carrying around extra pounds can affect hormone production and make it more difficult for a woman to get pregnant, says William Schlaff, MD, chairman of the department of obstetrics and gynecology at Jefferson Medical College, Thomas Jefferson University, Philadelphia. "The more weight a woman gains over her healthy weight, the more she tends to experience decreased ovarian function," he says. And a 2009 study published in Fertility and Sterility found that women who were obese at age 18 were more likely to develop polycystic ovary syndrome (PCOS) and have problems with infertility. PCOS is the most common hormonal disorder among women of reproductive age, and the leading cause of infertility.
I advise every parent of daughter to take care of her food from her childhood...If not she has to face Infertility problems during her young age which leads PCOS..Take care about your daughter's food so that she will not be obese in her young age...


The proportion of Australians who are overweight or obese is at an all-time high. We know excess weight is linked to many adverse health consequences, but there is now growing understanding that it also affects fertility.

A fine hormonal balance regulates the menstrual cycle. Overweight and obese women have higher levels of a hormone called leptin, which is produced in fatty tissue. This can disrupt the hormone balance and lead to reduced fertility.


The quantity and distribution of body fat affect the menstrual cycle through a range of hormonal mechanisms. The more excess weight and the more abdominal fat, the greater the risk of fertility difficulties.
Excess weight, particularly excess abdominal fat, is linked to insulin resistance (when the body has to produce more insulin to keep blood sugar levels normal) and decreased levels of sex hormone-binding globulin (SHBG), a protein that is involved in the regulation of the sex-hormones androgen and oestrogen.
My advise
1... Being overweight is defined as having a body mass index (BMI) of 25–29.9. Obesity is defined as having a BMI of 30 or greater. Within the general category of obesity, there are three levels that reflect the increasing health risks that go along with increasing BMI:
2,,,  Obesity causes many risks on pregnancy, her health and child birth
a.... Gestational diabetes is diabetes that is first diagnosed during pregnancy. This condition can increase the risk of having a cesarean delivery. Women who have had gestational diabetes also have a higher risk of having diabetes in the future, as do their children. Obese women are screened for gestational diabetes early in pregnancy and also may be screened later in pregnancy as well.
b...  Preeclampsia is a high blood pressure disorder that can occur during pregnancy or after pregnancy. It is a serious illness that affects a woman’s entire body. The kidneys and liver may fail. Preeclampsia can lead to seizures, a condition called eclampsia. In rare cases, stroke can occur. Severe cases need emergency treatment to avoid these complications. The baby may need to be delivered early.
c....  leep apnea is a condition in which a person stops breathing for short periods during sleep. Sleep apnea is associated with obesity. During pregnancy, sleep apnea not only can cause fatigue but also increases the risk of high blood pressure, preeclampsia, eclampsia, and heart and lung disorders.
d...  Pregnancy loss—Obese women have an increased risk of pregnancy loss (miscarriage) compared with women of normal weight.
e...  Birth defects—Babies born to obese women have an increased risk of having birth defects, such as heart defects and neural tube defects.
f..... Macrosomia—In this condition, the baby is larger than normal. This can increase the risk of the baby being injured during birth. For example, the baby’s shoulder can become stuck during delivery. Macrosomia also increases the risk of cesarean delivery. Infants born with too much body fat have a greater chance of being obese later in life.
g...  Preterm birth—Problems associated with a woman’s obesity, such as preeclampsia, may lead to a medically indicated preterm birth. This means that the baby is delivered early for a medical reason. Preterm babies are not as fully developed as babies who are born after 39 weeks of pregnancy. As a result, they have an increased risk of short-term and long-term health problems.
h... Stillbirth—The higher the woman’s BMI, the greater the risk of stillbirth.
3...  I advise woman who is obese should reduce her obesity with her healthy life style before conceiving.