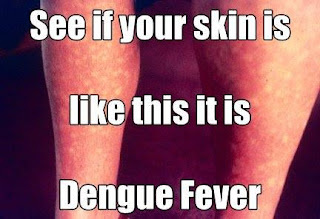 One of my friend asked me to explain ,,,DENGUE FEVERDengue fever, also known as break bone fever, is a mosquito-borne infection that causes a severe flu-like illness. There are four different viruses that can cause dengue fever, all of which spread by a certain type of mosquito.
Dengue (DENG-gey) fever is a mosquito-borne disease that occurs in tropical and subtropical areas of the world. Mild dengue fever causes a high fever, rash, and muscle and joint pain. A severe form of dengue fever, also called dengue hemorrhagic fever, can cause severe bleeding, a sudden drop in blood pressure (shock) and death.
Millions of cases of dengue infection occur worldwide each year. Dengue fever is most common in Southeast Asia and the western Pacific islands, but the disease has been increasing rapidly in Latin America and the Caribbean.
Researchers are working on dengue fever vaccines. For now the best prevention is to reduce mosquito habitat in areas where dengue fever is common.

Many people, especially children and teens, may experience no signs or symptoms during a mild case of dengue fever. When symptoms do occur, they usually begin four to seven days after you are bitten by an infected mosquito.
Dengue fever causes a high fever — 104 F degrees — and at least two of the following symptoms:
a....Headache
b... Muscle, bone and joint pain
c... Nausea
d... Vomiting
e..  Pain behind the eyes
f...  Swollen glands
g... Rash

Most people recover within a week or so. In some cases, symptoms worsen and can become life-threatening. Blood vessels often become damaged and leaky. And the number of clot-forming cells (platelets) in your bloodstream drops. This can cause a severe form of dengue fever, called dengue hemorrhagic fever, severe dengue or dengue shock syndrome.
Risk Factors
Factors that put you at greater risk of developing dengue fever or a more severe form of the disease include:
a.... Living or traveling in tropical areas. Being in tropical and subtropical areas increases your risk of exposure to the virus that causes dengue fever. Especially high-risk areas are Southeast Asia, the western Pacific islands, Latin America and the Caribbean.
b....Prior infection with a dengue fever virus. Previous infection with a dengue fever virus increases your risk of having severe symptoms if you're infected again.
Complications
If severe, dengue fever can damage the lungs, liver or heart. Blood pressure can drop to dangerous levels, causing shock and, in some cases, death.
Prevention
One dengue fever vaccine, Dengvaxia, is currently approved for use in those ages 9 to 45 who live in areas with a high incidence of dengue fever. The vaccine is given in three doses over the course of 12 months. Dengvaxia prevents dengue infections slightly more than half the time.
The World Health Organization stresses that the vaccine is not an effective tool, on its own, to reduce dengue fever in areas where the illness is common. Controlling the mosquito population and human exposure is still the most critical part of prevention efforts.