Longer time to conceive if your age is advanced

July 19, 2019
Longer time to conceive if your age is advanced 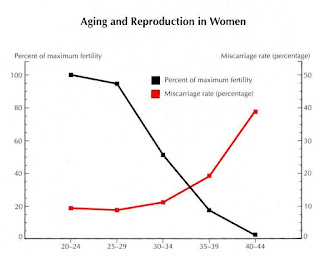 Your chance of conceiving quickly does depend on your age. Women are most fertile between the ages of 20 and 24. It can take much longer to get pregnant when you hit your late 30s or early 40s. You may have problems conceiving at all.
Over 80 per cent of couples will conceive within a year if they stop using contraception and have regular sex. Regular sex means making love every two to three days throughout your cycle. This gives you the best chance of conceiving.
About half of the women who don't get pregnant in the first year conceive during the following year, giving a pregnancy rate of 92 per cent within two years. So it pays to keep trying.
Figures for women aged 30 to 34 and aged 35 to 39 are fairly similar, with 94 per cent and 90 per cent conceiving within two years, respectively.
Because natural conception rates are so good given time, it's usually recommended that you only seek help from your GP if you haven't conceived after a year of having a regular sex (two to three times a week). But if you are over 35, and finding that positive pregnancy test elusive, it is important to seek help sooner rather than later.
I told U many times that your age plays major role to conceive. I advise every woman not to prolong for giving birth to Healthy child. Your body is natural and you can conceive naturally. In our nature God has put all nutrients needed for U to conceive in your Healthy food...Use it and give birth to Healthy child....to know about the contents in your healthy food
My advise
1.....   A woman’s best reproductive years are in her 20s. Fertility gradually declines in the 30s, particularly after age 35. Each month that she tries, a healthy, fertile 30-year-old woman has a 20% chance of getting pregnant. That means that for every 100 fertile 30-year-old women trying to get pregnant in 1 cycle, 20 will be successful and the other 80 will have to try again. By age 40, a woman’s chance is less than 5% per cycle, so fewer than 5 out of every 100 women are expected to be successful each month.
2....   Women do not remain fertile until menopause. The average age for menopause is 51, but most women become unable to have a successful pregnancy sometime in their mid-40s. These percentages are true for natural conception as well as conception using fertility treatment, including in vitro fertilization (IVF). Although stories in the news media may lead women and their partners to believe that they will be to able use fertility treatments such as IVF to get pregnant, a woman’s age affects the success rates of infertility treatments. The age-related loss of female fertility happens because both the quality and the quantity of eggs gradually decline.
3...... Women become less likely to become pregnant and more likely to have miscarriages because egg quality decreases as the number of remaining eggs dwindle in number. These changes are most noted as she reaches her mid-to-late 30s. Therefore, a woman’s age is the most accurate test of egg quality. An important change in egg quality is the frequency of genetic abnormalities called aneuploidy (too many or too few chromosomes in the egg)
4....    At fertilization, a normal egg should have 23 chromosomes, so that when it is fertilized by a sperm also having 23 chromosomes, the resulting embryo will have the normal total of 46 chromosomes. As a woman gets older, more and more of her eggs have either too few or too many chromosomes. That means that if fertilization occurs, the embryo also will have too many or too few chromosomes.
5.....  I advise every woman not to postpone to conceive due to any reason.
Brought to U.....  http://successgain.us