Your brain .. Left and right 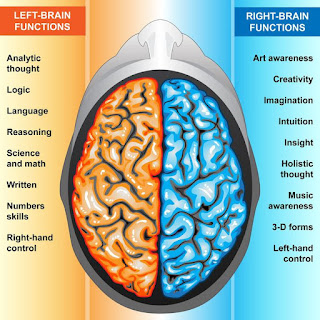 
The theory is that people are either left-brained or right-brained, meaning that one side of their brain is dominant. If you’re mostly analytical and methodical in your thinking, you’re said to be left-brained. If you tend to be more creative or artistic, you’re thought to be right-brained.
This theory is based on the fact that the brain’s two hemispheres function differently. This first came to light in the 1960s, thanks to the research of psychobiologist and Nobel Prize winner Roger W. Sperry.
The left brain is more verbal, analytical, and orderly than the right brain. It’s sometimes called the digital brain. It’s better at things like reading, writing, and computations.
According to Sperry’s dated research, the left brain is also connected to:
The right brain is more visual and intuitive. It’s sometimes referred to as the analog brain. It has a more creative and less organized way of thinking.
Sperry’s dated research suggests the right brain is also connected to:
We know the two sides of our brain are different, but does it necessarily follow that we have a dominant brain just as we have a dominant hand?
A team of neuroscientists set out to test this premise. After a two-year analysis, they found no proof that this theory is correct. Magnetic resonance imaging of 1,000 people revealed that the human brain doesn’t actually favor one side over the other. The networks on one side aren’t generally stronger than the networks on the other side.
The two hemispheres are tied together by bundles of nerve fibers, creating an information highway. Although the two sides function differently, they work together and complement each other. You don’t use only one side of your brain at a time.
Whether you’re performing a logical or creative function, you’re receiving input from both sides of your brain. For example, the left brain is credited with language, but the right brain helps you understand context and tone. The left brain handles mathematical equations, but right brain helps out with comparisons and rough estimates.
General personality traits, individual preferences, or learning style don’t translate into the notion that you’re left-brained or right-brained.
Still, it’s a fact that the two sides of your brain are different, and certain areas of your brain do have specialties. The exact areas of some functions can vary a bit from person to person.
My advise

1....Your brain has been divided in to two parts...i.e Left brain and right brain.Scientists are not sure the functions of left or right brain.
2...  These are the functions generally controls
a. Left brain controls movement of body right side
b. Right brain controls movement of the body left side
c. Most people's language are is left.
When two sides of the brain developed then only the person is perfect of all areas...other wise not
3... You can develop most areas of Left and right brain of your child before birth.
4... Every couple wish to have a child but they don't think about their would be child to be intelligent and brilliant
5... I advise every couple to take positive steps to have healthy, intelligent and brilliant child
Brought to U...http://successgain.info