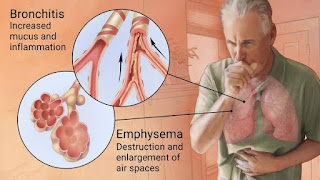 
It is an umbrella term used to describe progressive lung diseases including emphysema, chronic bronchitis, refractory (non-reversible) asthma, and some forms of bronchiectasis. This disease is characterized by increasing breathlessness.Many people mistake their increased breathlessness and coughing as a normal part of aging. In the early stages of the disease, you may not notice the symptoms. COPD can develop for years without noticeable shortness of breath. You begin to see the symptoms in the more developed stages of the disease. That’s why it is important that you talk to your doctor as soon as you notice any of these symptoms. Ask your doctor about taking a spirometry test.
What are the symptoms?
Increased breathlessness
Frequent coughing (with and without sputum)
Wheezing
Tightness in the chest
How common is COPD?
COPD affects an estimated 24 million individuals in the U.S., and over half of them have symptoms of COPD and do not know it. Early screening can identify COPD before major loss of lung function occurs.
What are the risk factors and common causes of COPD?
Most cases of COPD are caused by inhaling pollutants; that includes smoking (cigarettes, pipes, cigars, etc.), and second-hand smoke.
Fumes, chemicals and dust found in many work environments are contributing factors for many individuals who develop COPD.
Genetics can also play a role in an individual’s development of COPD—even if the person has never smoked or has ever been exposed to strong lung irritants in the workplace.
Here is more information on the top three risk factors for developing COPD:
Smo Kings
COPD most often occurs in people 40 years of age and older who have a history of smoking. These may be individuals who are current or former smokers. While not everybody who smokes gets COPD, most of the individuals who have COPD (about 90% of them) have smoked.
Environmental Factors
COPD can also occur in those who have had long-term contact with harmful pollutants in the workplace. Some of these harmful lung irritants include certain chemicals, dust, or fumes. Heavy or long-term contact with secondhand smoke or other lung irritants in the home, such as organic cooking fuel, may also cause COPD.


My advise
1..   If you are sufferer of COPD than you can prevent your child if you followa...   Change your residence if you are residing in industrial area particularly Chemical or pesticidesb...   Drink sufficient waterc...   Spend 30 minutes in garden or parkd...   Follow healthy habits
e....  Stay away from gases, liquids used to clean toilets...............Brought to U ....  http://successgain.info