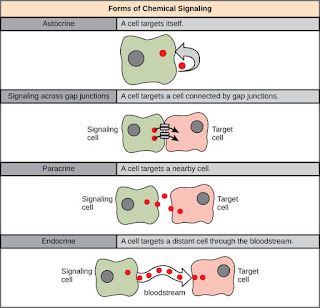 My memories
Your brain -- cell signaling 2
Posted in 2015

Signals that act locally between cells that are close together are called paracrine signals. Paracrine signals move by diffusion through the extracellular matrix. These types of signals usually elicit quick responses that last only a short amount of time. In order to keep the response localized, paracrine ligand molecules are normally quickly degraded by enzymes or removed by neighboring cells. Removing the signals will reestablish the concentration gradient for the signal, allowing them to quickly diffuse through the intracellular space if released again.
One example of paracrine signaling is the transfer of signals across synapses between nerve cells. A nerve cell consists of a cell body, several short, branched extensions called dendrites that receive stimuli, and a long extension called an axon, which transmits signals to other nerve cells or muscle cells. The junction between nerve cells where signal transmission occurs is called a synapse. A synaptic signal is a chemical signal that travels between nerve cells. Signals within the nerve cells are propagated by fast-moving electrical impulses. When these impulses reach the end of the axon, the signal continues on to a dendrite of the next cell by the release of chemical ligands called neurotransmitters by the presynaptic cell (the cell emitting the signal). The neurotransmitters are transported across the very small distances between nerve cells, which are called chemical synapses. The small distance between nerve cells allows the signal to travel quickly; this enables an immediate response.

My advise
1...Your child should have sufficient water in his brain before birth to develop cell signaling.
All of U know water is a good conductor of Electricity.
2...Mother has to supply water as needed ...So drink water
3...Our brain consists of millions of cells and need to be opened before birth with sufficient oxygen..   Mother has to supply sufficient oxygen..   If mother consumes heavy food, oily, non veg etc... the oxygen in her body will not be sufficient to digest her food due to it the child will not receive sufficient oxygen to open brain cells to think and act.   It impact on full life of the child.
4..So mother should eat healthy food which will consume minimum oxygen to digest so that the oxygen will be sent to her child to open brain cells
5...Wait to enjoy with your Brilliant child