Cause of Low sperm count--Male infertility 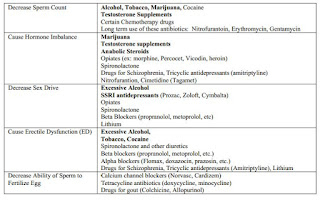 
Causes of Low Sperm Count - Male infertility
Natural ways to increase sperm healthThere are many potential causes of low sperm count and male infertility, fortunately many of them we have control over by reducing exposure to them.
Here is a list of the top culprits:
EMF’s – Electromagnetic frequencies (EMF’s) have been shown through studies to lower sperm count due to the heating of the testicles from the EMF’s. Do not keep your cell phone in your pocket and do not place yourlaptop computer on your lap.
Radio frequency electromagnetic waves (RF-EMW) – A study performed in 2011 (Fert. Ster. 1/2012) showed that RF-EMWs emitted from devices connected to Wi-Fi (wireless internet) decrease sperm motility, while increasing sperm DNA fragmentation. Men should avoid using laptop computers running on a Wi-Fi connection directly on their lap. In addition, be sure to avoid carrying a smart phone in your front pocket.
Cigarette smoking – Smoking damages the sperm. Period. The good news is the damage done from smoking can be reversed… As long as you quit smoking.
Pesticides and hormones in foods – The pesticides found on produce and the hormones added to dairy and meat have a HUGE effect on a man’s hormonal balance. Pesticides mimic estrogens in the body while the added hormones in meat and dairy are actual hormones (like estrogen) you do not want in your system.
Soy foods – Highly processed soy foods (soy milk, TVP, soy burgers, etc.) contain concentrated amounts of isoflavones, a type of phytoestrogen shown to block estrogen receptor sites that are needed for testosterone.
Alcohol– In a study of men with poor sperm quality, excessive alcohol consumption was associated with a decrease in the number of normal sperm.
Plastics – When plastics are heated they release xenohormones which mimic estrogen in the body.
Hyperthermia (overheating) – The testicles need to keep the sperm at a healthy temperature (which is less then the body’s temperature). It is thought that this may be in part why the male reproductive organs are external. Heat is known to damage sperm, so it may be best to avoid repeated exposure to activities that may elevate the temperature of the testicles. Examples are frequent use of saunas or hot tubs. In addition, tight underwear like briefs can keep the testicles from being able to hang and regulate their temperature. Boxers could be an alternative to briefs.
Stress – Stress can have a big impact on hormone balance which can in turn have an affect on sperm production.
I told U that Your mind plays an important role to cure your Infertility problem...Modify your life style, follow Healthy habits, Healthy food etc..keep your mind always positive....read my blogs to know scientific causes of Infertility, contents of your Healthy food which helps U to solve your problems visit http://successgain.us